There’s room in my house 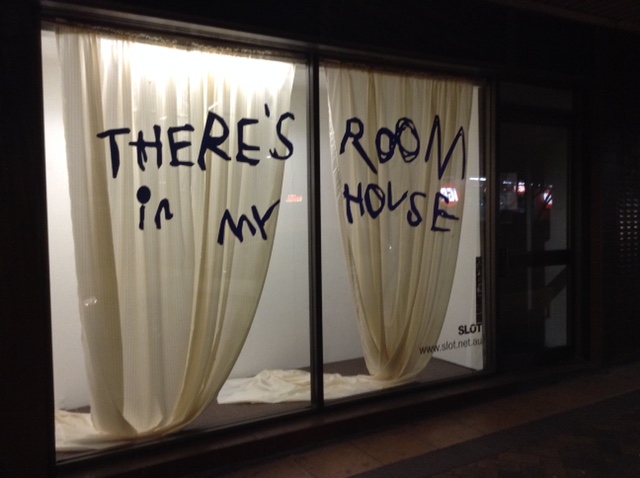 return to Slot with a work that references current issues around homelessness and the plight of refugees.
The work was inspired by a hand drawn banner made by 5 year old Xavier Egan for the Light the Dark Vigil at Sydney’s Hyde Park on Monday 7th September 2015[1]. The vigil drew attention to the displaced people around the world through messages of welcome and solidarity.
The rallies, which took place in a number of cities in Australia called on political leaders to take an active role to ease the suffering of the growing numbers of refugees worldwide.
The work by Kenning and Pedley at slot consists of a set of curtains, made from the conservatively styled material used to the line suits of corporate clothing, most typically suits. The curtains are casually draped reminiscent of the carefully chosen furnishings that differentiate a house from a home and provides a sense of place that are currently not available to many refugees. The matter of who is allowed to become a resident and can make a home is complex. It involves engaging with issues of nation states and territories, economics, politics and warring factions. The simplicity of the message ‘There’s room in my house’ written in blue in a child’s handwriting stands in stark contrast to the cacophony of voices commentating on the events as they unfold. It risks being an oversimplification. But, it reminds us of the role that creativity, art and imagining can play in cutting through and demonstrating basic shared humanity.


[1] A photo of Xavier Evans and his hand written message appeared in the Sydney Morning Herald. Photo: Luke Vodell
Posted by Unknown at 2:55 PM No comments: 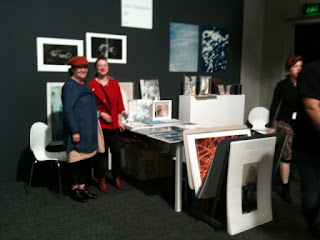 Ultimo Project Artists are currently on stand P15 in Bay 19 at Sydney Contemporary Art Fair. Call by today from 10 am - to 6pm and tomorrow until 5pm 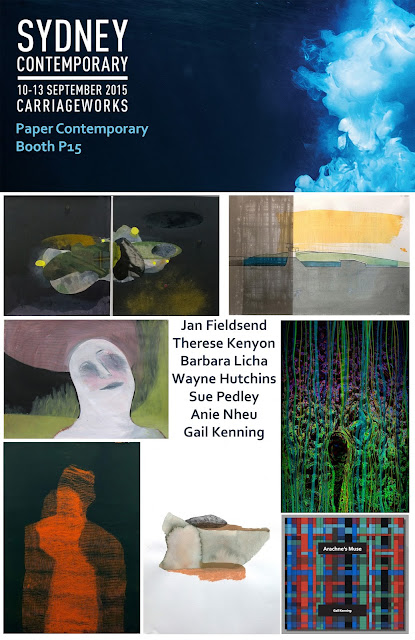 A selection of artists from the Ultimo Project will be exhibiting as part of Paper Contemporary at Sydney Contemporary 2015. The work will be available for viewing and purchase at booth P15

Posted by Unknown at 2:54 PM No comments: