Finally a quick one for the Illustration Friday "dusty", using one of the piggies from my previous illustrations.
Posted by Graham Byrne at 1:52 PM 1 comment: 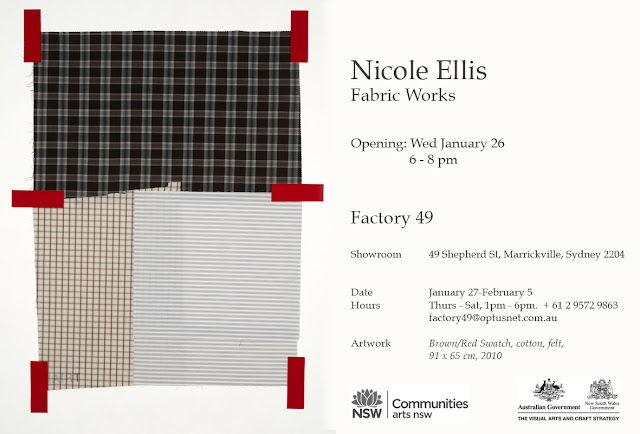 Posted by Ultimo Project Studios at 5:45 PM No comments:

Gail Kenning and Sue Pedley share an interest in pattern and processes. Kenning works with form, structure, code and data to create patterns that seemingly dissolve into random or develop into chaos.


These emerging patterns are exhibited in the form of programmed animations and physical lace, woven or knitted artefacts. Pedley draws out patterns of cross-cultural connections between people, places and objects. These patterns are exhibited as animations and collages. The recent body of work involves interweaving paper and textiles found in an abandoned house while developing an installation for the Setouchi International Art Festival (2010) in Japan.

Artist talks Saturday 22nd 3.30 pm
Gail Kenning is a UK-born Sydney-based artist and researcher. Kenning completed a program of research at the Royal College of Art in London working alongside the Fine Art Tapestry course and was awarded a PhD in Art Theory from UNSW for practice-based experimental research exploring textile pattern forms in digital media. Kenning has completed residencies and exhibited in UK, US, Australia and Vietnam. She recently presented digital video animations at the International Symposium of Electronic Art in Belfast and Textile Society of America Symposium in USA and will exhibit at the Powerhouse Museum in Sydney in 2011. She has also been involved in the development of software applications in both professional and creative environments.

Sue Pedley is a Sydney based artist who explores ways to experiment with materials and their relationship to place, and to reformulate basic elements of time, light and space. Pedley has undertaken Australia Council Residencies and projects in France, Germany, London, Vietnam, Japan, an Asia Link residency in Sri Lanka, and a Walking and Art Residency in Banff, Canada. Exhibitions include Blue Jay Way, Heide Museum of Contemporary Art and Penrith Regional Gallery Lewers Bequest (2007). She was an invited participatant in Setouchi International Art Festival (2010) and Echigo Tsumari Art Triennial (2006).
Posted by Ultimo Project Studios at 10:26 PM No comments:

Barbara Licha is in SCULPTURE 2011